Milestones in the history of JUWI

We work for a climate-friendly, secure, independent and economical energy supply. Every day. For more than 25 years.

With passion and confidence

It was a time for energy pioneers when JUWI in Rhineland-Palatinate and Windwärts in Lower Saxony were founded in the mid-1990s. They recognized the potential of renewable energies early on. Much earlier than others. And prevailed against much opposition.

We are now continuing this success story. Under the umbrella of MVV Energie, which has set itself the goal to become #climatepositive by 2040. 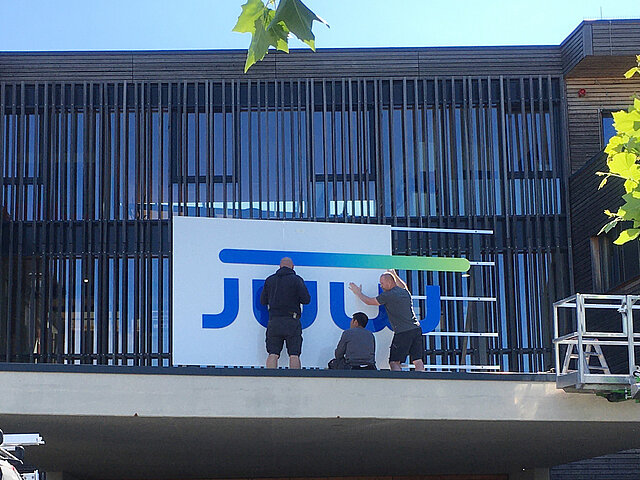 For even more good energy

In 2018, the previous majority owner, Mannheim-based MVV Energie AG, takes over 100 percent of the shares in JUWI.  A further important impulse for the expansion of renewable energies. In 2019, JUWI reaches another significant milestone and constructs its 1,000th wind turbine with the wind farm in Mohlis (Thuringia). With the construction of two solar parks in Brandenburg, JUWI also completes its re-entry into the German solar business. In 2022, JUWI and the MVV subsidiary Windwärts join forces. With this double load of expertise and a new brand identity, JUWI will be an even more successful enabler of the energy transition than before.

In 2016 JUWI realizes its largest solar plant to date in the company history: the 86 MW Sonnedix Prieska solar plant in South Africa. In 2018, a 135-megawatt solar project in India breaks this company record. JUWI also sets new standards in Australia where the largest solar off-grid project in the world is built in the Australian outback. The 10.6 MW solar plant, which is built to supply power for a mine, also holds a 6 MW battery storage. Many more utility-scale solar plants are realized in the US, South-East-Asia, Japan and in Turkey. 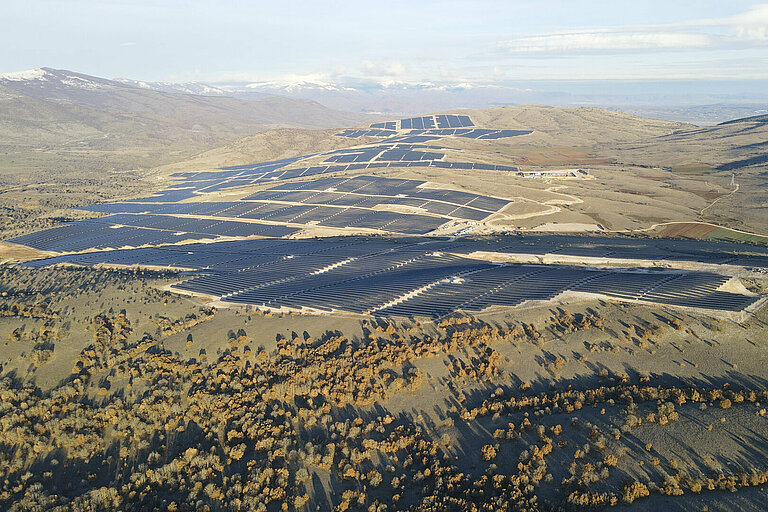 In April 2022, JUWI puts Europe's largest bifacial solar power plant into operation in Greece and, furthermore, takes over the operation management and maintenance. The solar park has a capacity of 204 megawatts and is located approximately 500 kilometres north of Athens. 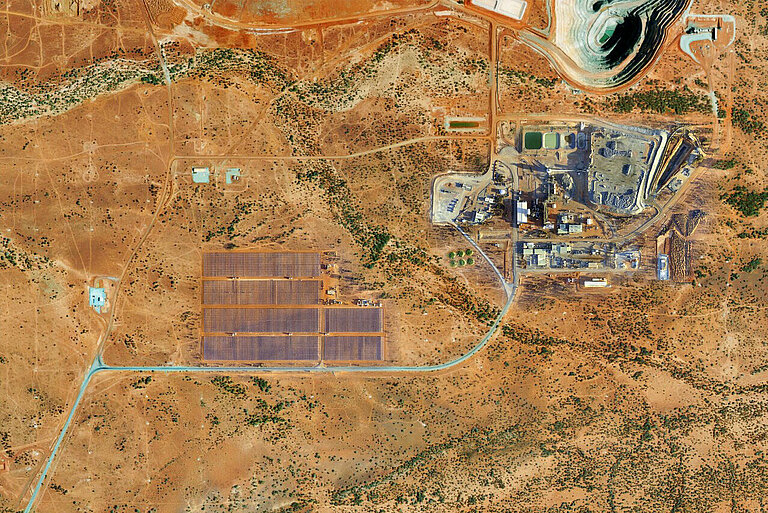 The company is also setting standards in Australia: JUWI is building the world's largest solar hybrid power plant in the Australian outback. The plant to supply a mine includes a 10.6 megawatt solar park as well as a six megawatt battery storage system. JUWI is realizing many other large-scale projects in the USA, South-East-Asia, Japan and Turkey.

In 2016, the Sonnedix Prieska project in South Africa was constructed. It was the largest solar farm in the company's history to date with 86-megawatt. The internal record was broken in 2018 with a 135 megawatt solar project in India. 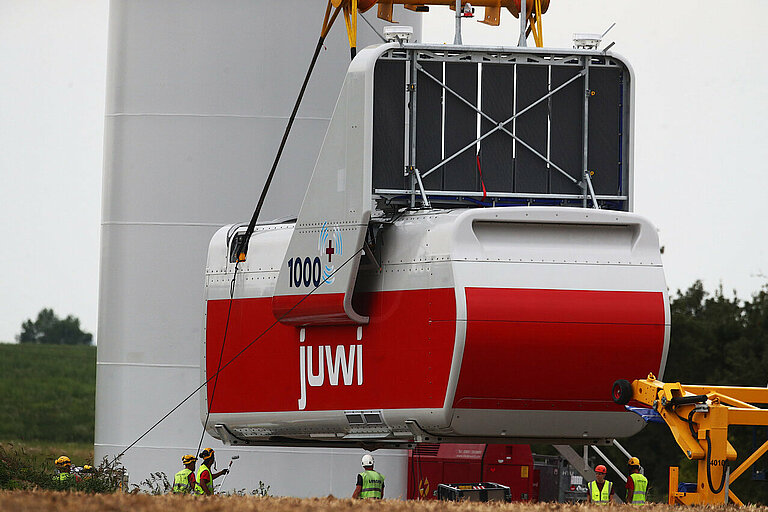 In Germany, JUWI initially focuses on the development of wind farms. Shortly after the turn of the year 2016/2017, JUWI crosses the threshold of 2,000 megawatts of wind energy capacity that the company has connected to the grid. In 2019 JUWI reaches another significant milestone and erects its 1,000th wind turbine with the wind farm in Mohlis (Thuringia). 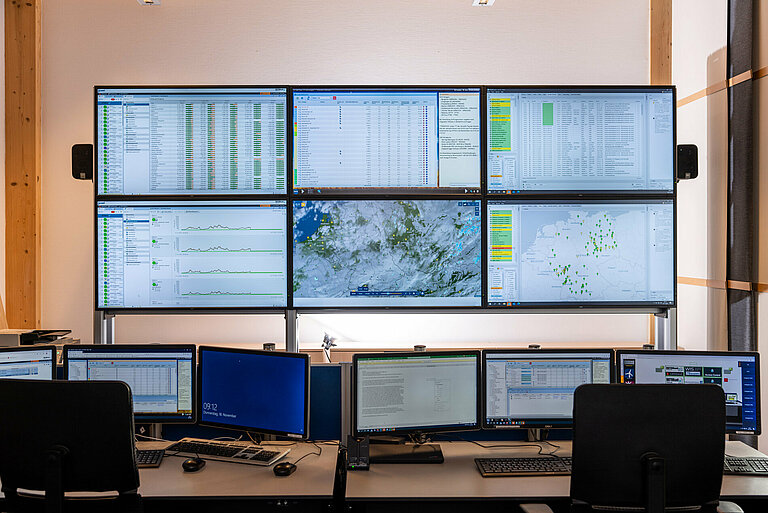 In addition, the operational management business plays a very important role: with its modern control room and 24/7 service as well as a globally managed plant portfolio with around 5,000 megawatts of wind and solar energy capacity, JUWI is one of the major providers in the field of technical and commercial operation management. 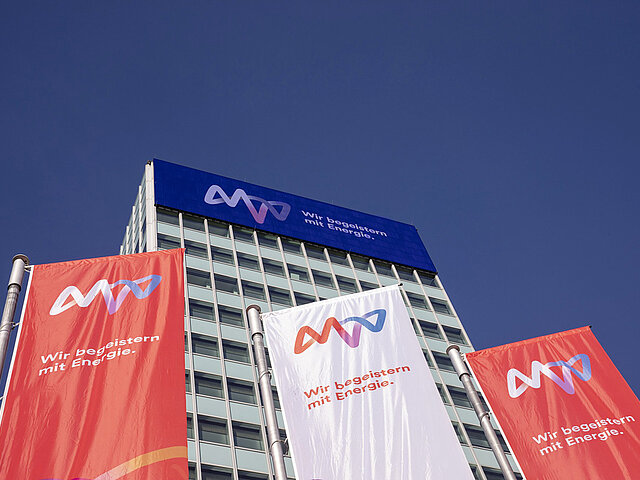 A focus on core business

The political framework in the home market Germany and in many other European countries deteriorates distinctly. After the reform of the German Renewable Energies Act in 2012, the German solar market collapses. JUWI reacts by restructuring the company and distances itself from marginal businesses in the years to follow. The company ends its B2C, biogas and wood pellet business as well as the development of components. Instead, JUWI concentrates on the development and construction of wind and solar farms and their operation and maintenance. By the end of 2014, Mannheim energy supplier MVV Energie AG invests in the JUWI Group. This partnership stabilizes JUWI sustainably and offers new perspectives for the future. 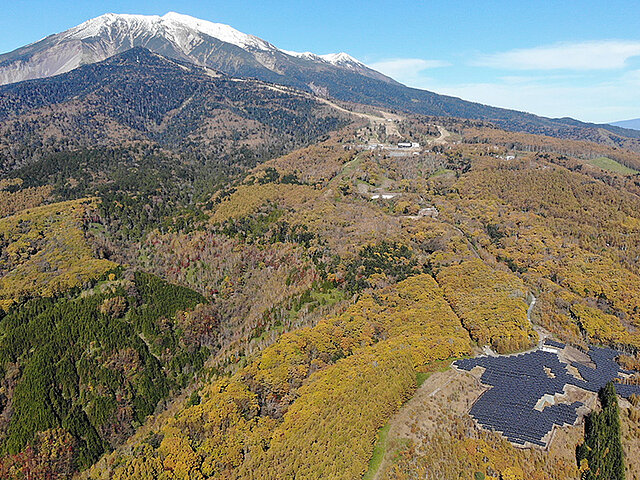 A reorientation, furthermore, took place internationally. Subsidiaries were closed in Europe and Latin America, while business in the Asia-Pacific region was further expanded with activities in Japan, Thailand, the Philippines and Australia as well as the APAC headquarters in Singapore. JUWI realized a whole range of different solar projects in 2015, including in Japan and southeast Asia, India and the USA. 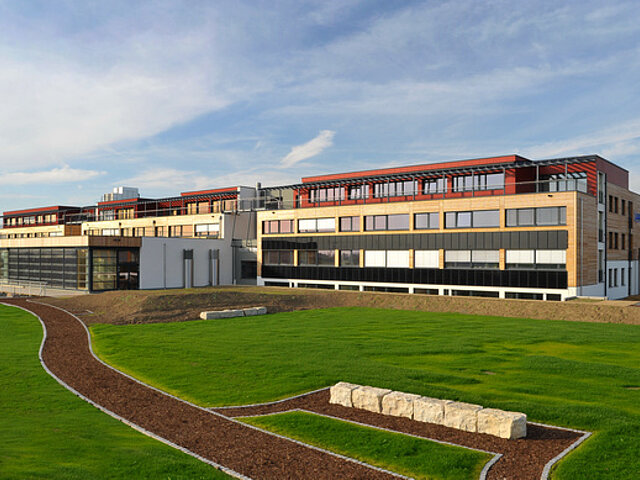 An era of enormous expansion begins for JUWI. By the end of 2010, the number of employees increases to more than 1,000. In 2008, the company moves to its new headquarters in Wörrstadt, which has to be extended by a second building soon after. The expansion trend is also persistent internationally: activities are launched in Poland, the Czech Republic, Greece, South Africa and India. In 2009, JUWI builds a 50-megawatt wind farm in Costa Rica, the largest wind farm in Central America to date. In the US, a 60-megawatt park is erected in Nebraska. 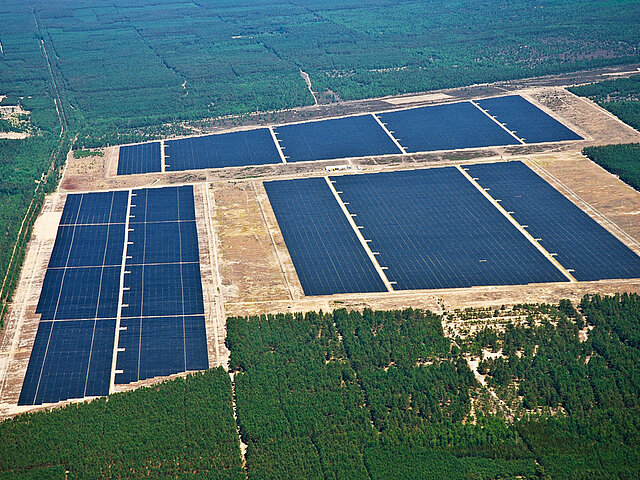 In Germany, JUWI increasingly builds large parks at complex sites, often in woodlands. In the solar business, the company also enters new dimensions. On a former military training area, JUWI builds the third largest solar farm worldwide to date in the year 2006 with 53 megawatts. Additionally, the company begins to enter new business areas: several biogas and wood pellet plants are built and JUWI begins to work on electromobility. Moreover, JUWI starts to carry out repowering in the wind sector. 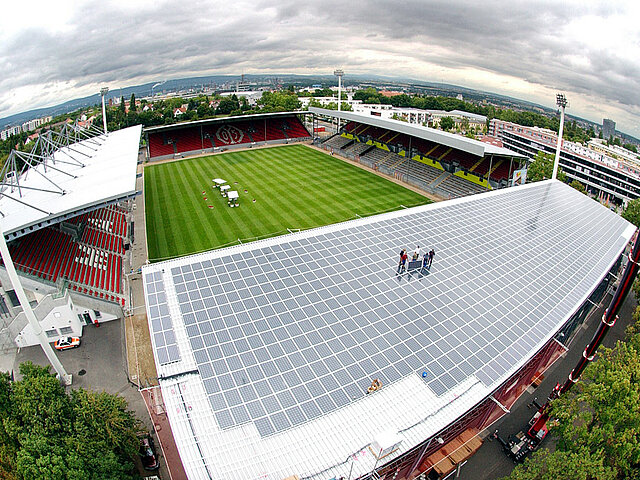 A second area of business: Project development in the solar sector 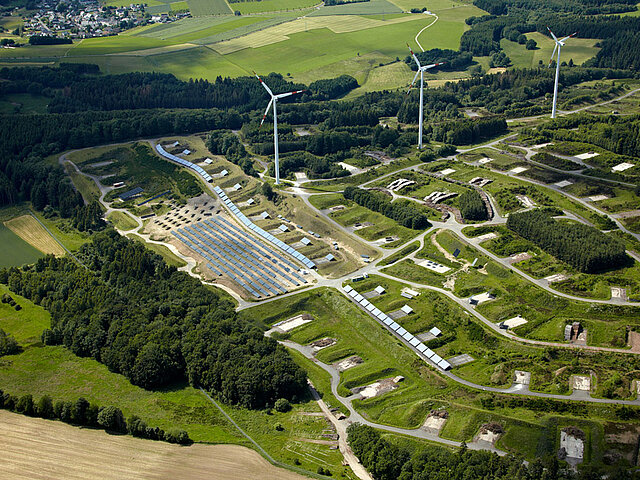 At the same time, JUWI develops its position as one of the leading specialists for wind energy onshore. In 2002, the company installs its 100th wind turbine. In the same year, the pilot project "energy landscape Morbach" in the Hunsrück region is launched with 14 wind turbines and solar cells with a total capacity of 500 kilowatts. JUWI also commences its activities abroad. In the Breton village of Plouguin, in the north-west of the French seaport Brest, JUWI installs its first wind farm abroad in 2004. Further business follows in the US, Spain and Costa Rica.

How it all began

Independently from one another, physicist Matthias Willenbacher and agricultural economist Fred Jung began to measure wind conditions at their parents' farms in the Palatinate. After their first meeting, the two men decide to work together and, on December 4th, 1996 they found the company Jung & Willenbacher Windenergie GmbH, later re-branded juwi GmbH. 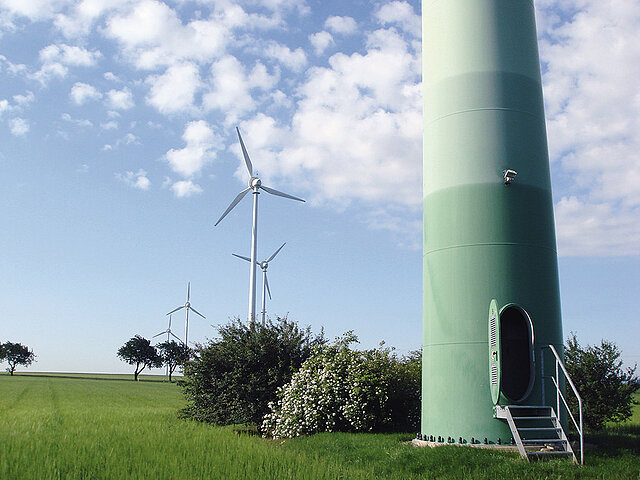 In 1997, the first wind turbines are installed at Schneebergerhof (Donnersberg region) and three further plants in Spiesheim (Alzey-Worms) follow. Only two years later, JUWI builds the largest wind farm to date in south Germany. Near Alzey in Flomborn, Steten and Ilbesheim the young enterprise installs 19 wind turbines with a total capacity of 19.1 megawatts. In 1999, JUWI enters the solar business and realizes its first large solar plant in the following year, in Kirchheimbolanden.

All business starts with a conversation. Please contact us! 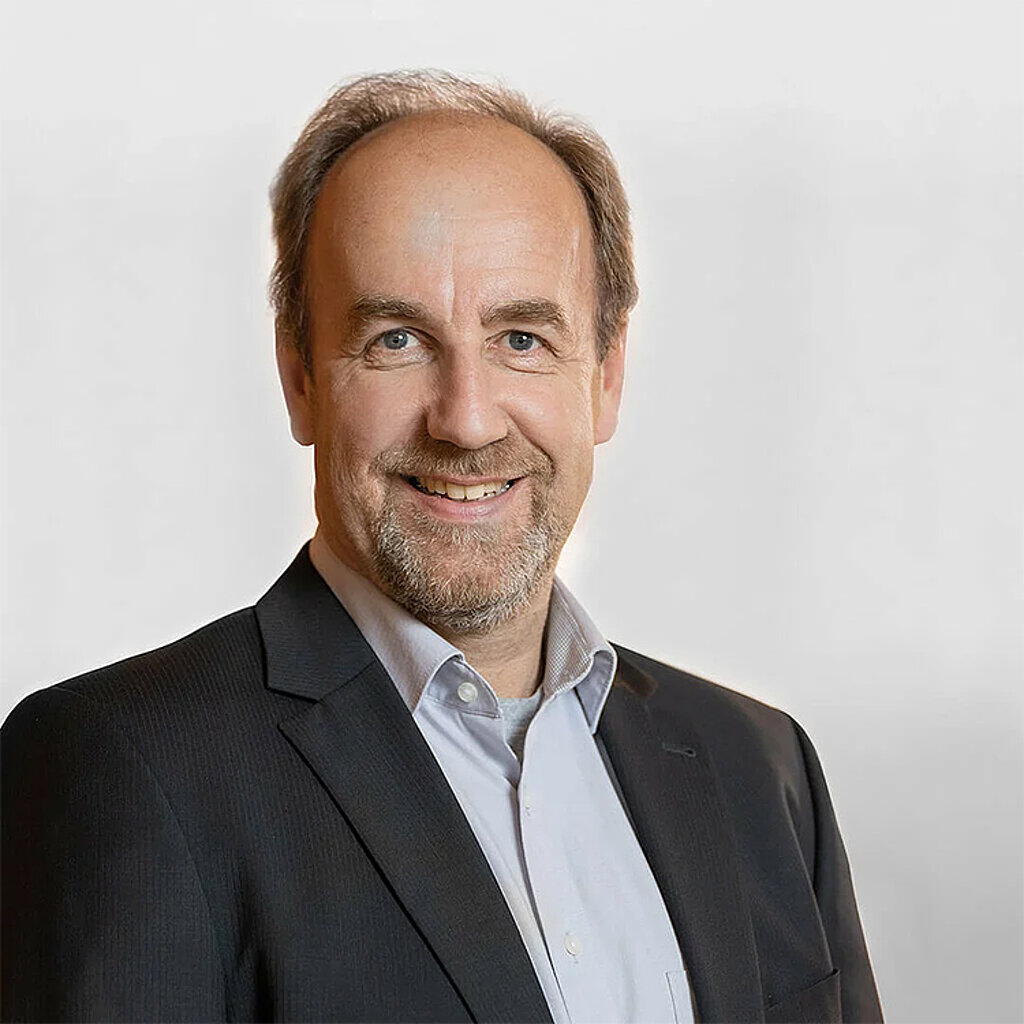 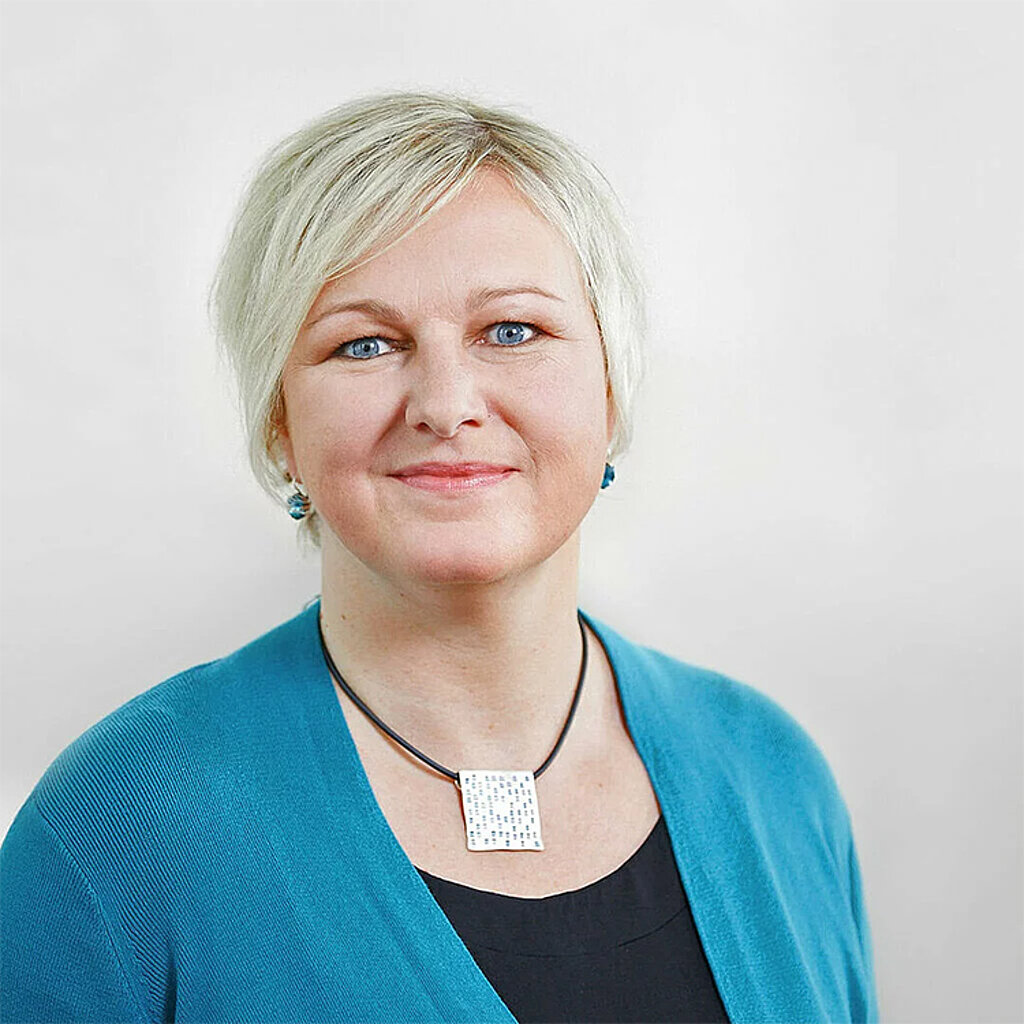